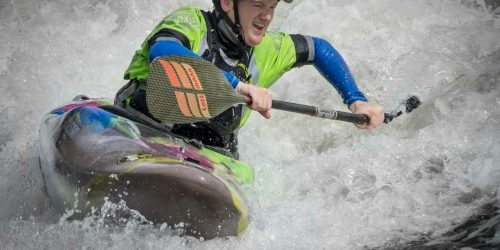 In short:
I’ve often said that there aren’t any really bad boats any more. Boat’s have evolved over time and what we have now are all pretty good boats. There are, on the other had, a few really good boats. The Zen is one of these!

About me:
I’m 13 Stone, I’m 6ft, I normally paddle a Jackson Karma (Medium), I paddle grade 3-4 and occasional 5 water, and I paddle Holme Pierrepont regularly. I do play about in a Rockstar from time to time – but I like big boats on bouncy water!

The Boat:
DM kindly let me have a play with their demo Zen (Large). I’m not in the market for a new boat, but I like trying things out, so I spent a happy couple of hours on the Holme Pierrepont white water course in a 2015 Zen in a colour scheme Jackson call “Tie-dye”. I think if the worst thing you can say of a boat is that you don’t like the colour then it must be a reasonably good boat – so well done there Jackson!

The boat is 9” long and a quick inspection of the underside of the hull will confirm it’s a river running boat that you can creak with (I shall thus call it a creak(ish) boat!). So I’ll be comparing it to my Karma which is a creak boat that you can river run in…

The Outfitting:
There’s not a lot to say here. It’s standard Jackson outfitting so: comfy; quick to adjust; robust; and light. There are those that don’t like the string and clam cleat back-band, saying they slip. I’ve never had a problem with them until the string starts to get warn out, then I just replace it (DM recommend 8mm floating rope XXXX CHECK XXXX). So I, for one, am happy here.

On the flat:
This is obviously not where this boat is meant to be. But it’s nice to get a feel for it’s stability and carving though. In common with the Karma, the Zen feels a little twitchy with a lack of primary stability. It more than makes up for this with excellent secondary stability. I’m a fan of this style of boat (I even raise the seat in my Karma for a little more tippyness) as it allows you to go quickly from edge to edge and drive the boat around, carving hard. Engage the rails at the front and it will pull round like a dream. Engage the back for a more gradual but precise carving turn. It’s also very quick and easy to roll.

Down river:
I was a bit upset with this at first. Smashing down the course was great, but whenever I went for a tight turn in an eddy the rails at the back seemed to catch there’d be that awkward wallowing wobble. Moving the seat forward one notch and edging a little more aggressively pretty much fixed that though. While driving forward this boat is a true dream. When stationary or manoeuvring at low speeds I’d say the Karma (or Dagger Nomad, Zet Raptor etc) is a little better behaved, but by a narrow margin. This does great credit to Jackson as this boat is clearly designed for speed. Comparing it to Pyranha’s  9R which is similarly designed for speed, the Zen is much better behaved.

As for that speed, I’m no racer so down river I didn’t really notice it. It’s a dream on a hard ferry though.

Playing:
This may seem a silly section for this boat – it’s clearly not a playboat. I’m a big fan of surfing my Karma on all the waves and holes on Holme Pierrepont though. I may not get any massive air, but it’s still fun to surf and spin! Here, the Zen does not disappoint. This is, by far, the best creak(ish) boat I have ever paddled in a hole or on a wave (though the Pyranha Burn and Waka Tuna are both pretty good at this). The full plaining hull (unlike the semi displacement of the Karma) means you can side-surf a powerful hole in comfortable stability. No uncontrolled bounding around. It even released into plaining mode and started bouncing on the green water above the seam. When you want to get out of the hole, just engage those carving rails and out you zip. On a wave, this boat comes to life. Precise carving and fast edge to edge transitions make it a joy to surf. On a fast wave it easily releases and starts plaining around. I think this may be the only creak(ish) boat I’d want to try surfing in the sea.

This is all good news for a river running boat. Carving out of holes you’ve landed in and using waves to get around the river are both big pluses.

The Boof:
Here I’m afraid we must move into the realms of guesswork. There are no great opportunities to boof on the white water course, so these are my estimates:

This is not a full no creak boat. It dose not auto boof. But if you get the stroke it works great. I defiantly had no problems bringing the nose over holes, but I had to do it while some boats seem to want to do it for you. Here, I think I’d give the edge to my Karma.

Rocks!:
Again, my estimates… This is the trade-off you get with those awesome carving rails. That slight wallow as you come into an eddy with your weight back is a symptom of the relative harshness of those rails. This is not the boat I’d want for rock slides or chossy bolder gardens. I think it’d just be a little to catchy. It’s probably better than a Burn though.

Waterfalls:
My final guess for today. That big plaining hull might (just might) be problematic if you land too flat.

Compared to other boats:
I’ve been comparing to the Karma as the boat I’m most experienced in. Arguably though, as a rover runner that can creak, this is aimed more at the same class as the Pyranha Burn and Dagger Mamba. So, some quick comparisons:
It’s faster. Much faster. I find it more comfortable. It’s quite a bit longer but does not feel like it on a river. It carves more like the Mamba than the Burn, but in my opinion surfs better than either. To someone trying it for the first time the main difference will be the stability. Both the Mamba and Burn have more primary stability, so be ready for a twitchy first few strokes.

In conclusion:
For full on creaking or bouncing down rocky ditches in the UK I’ll be sticking with my Karma for now, but if it breaks I’ll be strongly considering the Zen. This is defiantly an awesome boat. Of all the big river runner/creaker boats I’ve paddled this would be by far my favourite for big volume river running. And I’m sure it can creak pretty dam well too. More than all this though, its just great fun. Fast, precise and fun! 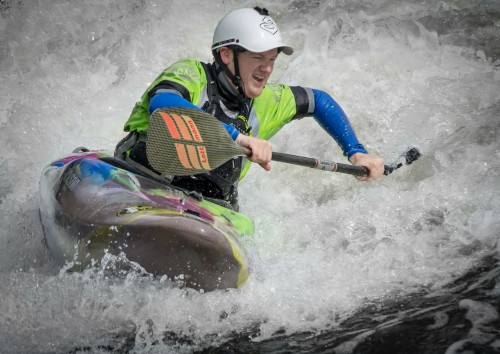